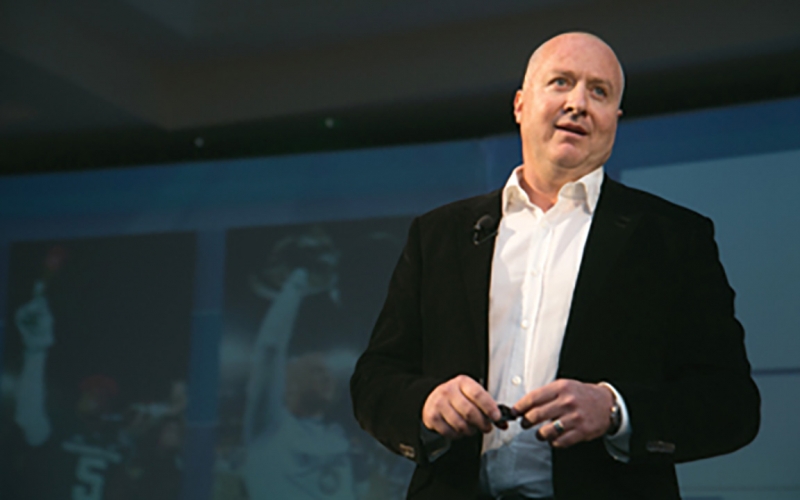 Dedicated to unlocking human potential, Walshe discusses what he’s learned from Red Bull’s ‘portfolio of talent’ – athletes and artists, designers and entrepreneurs – and what it could mean for the future.

When you think about human performance, the question that jumps straight out is, How good can we get? What is the limit to how good people are going to get?

I think you are going to see in the next 10 to 20 to 30 to 40 years a significant acceleration in what we can do with people and hopefully in support of greater goals than just what we’re doing today.

The best golfer in the world, how will we make them better? And we think about it not just in the terms of what makes a great golfer, but what makes a great human. What would a golfer look like with the mindfulness of the Dalai Lama, the spiritual awareness of Mother Teresa, the ability to perform under pressure like a Tier 1 operator in Special Forces?

Add in that a little exploration, a little idea of you don’t know what your limits are, you don’t accept common boundaries, and you’re going to get this idea of what a future state for that person looks like. So we project an image or a model for the best in the world that exists 10 years in the front, and we build towards that.

If you think about our portfolio of talent — several hundred athletes, about 150 different sports and disciplines, musicians, artists, entrepreneurs, designers — if we understand and learn from that group as a whole, we can create these fundamental premises upon which everything is built.

So if we take skill … we break it down to the idea that if you are motivated, you’ve got the opportunity to practice it, over and over again, you build progression into the system, you give them feedback as to how they’re doing, and you let them fail, in practice. You can get people to move from here to here. It’s that simple.

Several years ago New Year’s Eve, one of our athletes jumped on top of the Arc de Triomphe in Las Vegas as part of a New Years, No Limits program. Well, this is how we got him there.

The chance for him to repeat and practice over and over again. The idea that we told him exactly how he was performing with a bunch of systems, video-based essentially, to give him feedback. The scaffolding, we increased 10 foot at a time. And the whole setup there has big foam pits, safety systems set up so that he can actually fail in practice. So even for the most quote-unquote extraordinary things you see people do, the fundamental premise applies.

When I moved from mostly traditional sports, professional sports, into the action sports world … I was watching athletes do these extraordinary things, executing at the highest level, performing under the most extremes of pressure, with real life-or-death consequences. … And these people have had no coaches, no trainers, no psychologists, no nutritionists.

It opened up this understanding for us that, as much as we could support the individuals in our program, we could learn.

We set up some programming so we could really understand at that critical decision point what it takes to make the right or wrong decision. … We started to measure every one of our athletes.

And the science, as it’s building, and as the math is getting better, the understanding is getting better, we’re seeing it point to a significant difference between those who perform so-so and those who perform at the highest level. Which really sucks if you’re a guy like me and have a brain like … the ordinary or the average. Until the technology advanced so quickly so that the system now, the same system used to record and understand what’s going on in an individual, also allows you to reverse-engineer that.

What I mean [is], plug in what a good brain looks like, and through a basic set of apps and programming, train it up.

We’re not far away [from] “The Matrix,” and jack in the back of the brain. And I don’t say that lightly.

Better in life, better in sport. You know, if you don’t take care off the field or at home, it can hurt you so profoundly on the field of play that it distracts from all the good work you’re doing there.

As much as we try to hack and understand talent on this side of the shop, the fundamental principles of helping people become more aware, and become better as humans really, is the foundation of why we’re in the business.

When you think about those leaders in sport, those individuals who are beyond the best, who redefine how a game is played … they are by definition creating.

It’s an insight that no one else will have, which translates to competitive advantage.

If we can hack talent, and share it with the world and have a 1 percent effect, we’re going to be able to obviously keep doing the fun things we do, but more importantly give people the capacity to solve our world’s greatest challenges.

Read the original article on sportsbusinessdaily.com

Dr. Andy Walshe, talks about “Hacking Creativity" and how “extraordinary people” are similar and different from the rest of us.