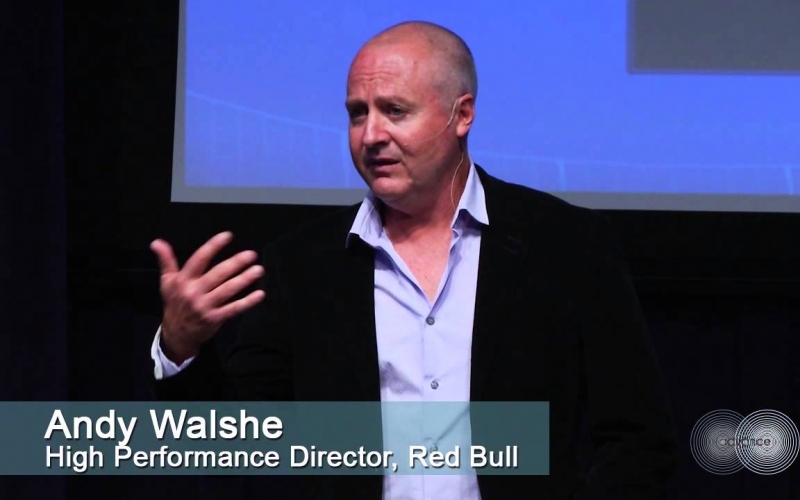 “If you’re going to stay around and be safe for your whole life, then you’ve never really lived, and you’re already dead.” – Travis Rice, pro snowboarder

At the core of the Law of Accelerating Returns is the switch from linear to exponential progress. Whether an individual is accelerating that progress through a breakthrough in nanotech or during a supersonic free-fall from 128,100 feet, there’s one leading commonality—being on the edge.

In fact, optimizing the very top talent is less about what they actually do, according to Red Bull’s High Performance program director, Dr. Andy Walshe. The key is developing the human as a whole, and training just beyond the edge of the cliff—sometimes, literally.

With a portfolio of talent spanning over 800 athletes across roughly 180 different sports and nearly 5,000 musicians, artists, designers, photographers, professional gamers, and recently, young serial social entrepreneurs, Red Bull’s High Performance program is redefining what it means to hack the talent of elite performers.

“They all have one very fundamental thing in common—typically to get into the program they have to be best in class, or at least trying to be,” Walshe says.

So how do we hack talent that’s already at the top of the game and optimize what is already optimal? In the age of exponential technology—what is an exponential human? Simply put, the exponential human uses data and deep insights into human behavior to rapidly accelerate performance.

This kind of titanic progression can be deconstructed with advanced data and deep insights into human behavior. Hacking talent, then, becomes a science and an art (and sometimes even slightly mystical).

Just as we use technology to create even more sophisticated technology, we can use increasingly sophisticated technology to derive increasingly detailed insights into human performance and our own functionality. This tightening of the feedback loop between action and insight is what helps us optimize and accelerate this progression. For example, Red Bull’s High Performance program is monitoring the brains of professional endurance athletes while using chemicals that suppress the brain’s perception of fatigue, in order to keep the body going.

When it comes to optimizing human performance, however, deep learning and AI are not the ultimate hack. Science and technology alone are simply not enough.

“Of all the skills we work with, life skills are probably the most critical,” Walshe said during a recent talk on hacking creativity. “If you get everything else right at the elite level but you screw this up, it goes sideways.”

“Environment does a lot of the teaching for you,” which is why Walshe and his team have discovered how to use uncertainty as a training methodology—namely, by throwing their elite talent into unfamiliar and extreme environments, environments that often have nothing to do with their area of expertise.

The team, for example, sends pro surfers to train with Cirque du Soleil and, last year, shipped off another group for an expedition in Patagonia with little to no information on what to expect.

These adventures aren’t about hacking the flow state or measuring the mind, they are about having elite performers leap into the total unknown, and making it work when the stakes are high and the only option is to perform under extreme pressure. Period.

By challenging these athletes in a very uncommon environment, mentally, physically, spiritually—magic tends to unfold.

Walshe’s team has found that functionally and structurally, the brain can restructure how an individual reacts to and deals with stress.

“We’re not changing them physically in three days. No chance. All we’re showing them is we’re bringing their perception of what’s possible in line with what is actually possible, and we’re allowing them to push up against that space in a nice measurable way,” says Walshe.

Aspects of their work in optimizing human performance even touches on the spiritual—drawing inspiration from legendary writer, lecturer, and mythologist, Joseph Campbell, on epic adventures and tales of extreme triumph.

In reflecting back on Red Bull’s Stratos Walshe says, “One of our lessons was that we hadn’t prepared well enough for the unknown.”

Though, I have to ask, doesn’t Walshe’s reflection ultimately reveal the very ethos of the unknown, of training in uncertainty? When far out on the frontiers of the unknown, isn’t that inherent risk and unknowable reward truly what accelerates human progress?

See the original article on singularityhub.com

Dr. Andy Walshe, talks about “Hacking Creativity" and how “extraordinary people” are similar and different from the rest of us.